The Regalia consists of two Maces, the City Sword, the robes and the City Watch Staves

The Mace is the symbol of civic authority. In 1590 Queen Elizabeth I granted a Royal Charter to the City of Bath. Theis required the appointment by the Corporation of two Sergeants at Mace, who should accompany the Mayor and carry Maces of gold or silver. In 1631, the Corporation purchased a more impressive pair worthy of civic functions.

Bath’s current Maces were made in 1708 by Benjamin Pyne, a London goldsmith. They are silver gilt amd 114cm long. Below the Imperial Crown the surface is engraved with the City Arms, rose, thistle, fleur-de-lys and harp with the Royal Arms of Queen Anne in the top.

The Mace is a traditional weapon of war based on a caveman’s club. A bell shaped cup was added to protect the hand in battle. As the civic use of the Mace increased, this end was enlarged and became more elaborate. A coronted rim was added, making the handle larger than the head. Then the coronet was expanded to become a full size noble crown surmounted by an orb and cross. 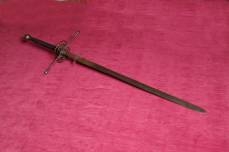 This is a reproduction of the Civic Sword – known as the Bladud Sword – which originally belonged to the City of Bath, but is now on display in Oriel College, Oxford.

Alderman Robert Edmund Dickinson MP had this replica made by Wilkinson, Pall Mall, London and presented it to the city in 1902. It is two-handed, two-edged, 162 cm long (including the leather-covered hilt), has a wrought-iron cross-guard and weighs 3.4 kg.

Inscription engraved on the blade:

It is possible that Tudor Mayors in Bath wore a scarlet robe edged in fur. Certainly, this was the case with most other City Corporations at the time. During the 18th Century it would appear that Mayoral Regalia was limited to a simple black gown, similar to that worn by undergraduates today. This can be seen in the 18th Century portraits in the Council Chamber at the Guildhall.

The red robe was reintroduced in 1850. On 18th March, the Mayor, Frederick Dowding, wore it at Mansion House, London to meet Prince Albert.

A gown and cap were purchased in January 1900. The gown is olive green lined in maroon and based on the dress of the 16th Century. The ‘manche’ sleeves have a scalloped border with the City Badge emblazoned on the left arm. A silver chain is fixed to the shoulders with scarlet ribbon bows. It is worn with a sable Cap of Maintenance, black velvet breeches, stockings and buckled shoes.

The Mace-Bearers wear black. Their fur-trimmed robes have hooped shoulders and are worn with gloves and a black cocked hat.

The Mayor wears a scarlet robe of superfine cloth trimmed with fur fabric, a lace jabot round the neck and a black hat with a gold flash. The Deputy Mayor wears a similar robe in purple.

The Charter Trustees (Councillors) wear a dark blue robe, trimmed with blue velvet. Man have a bi-corn hat, women a tri-corn (three-cornered) hat and a lace jabot. The Honorary Aldermen wear the same as the Charter Trustees but with purple robes.

The Mayor’s Officer wears a top hat and tails, decorated with gold braid and brass buttons, with a gold waistcoat.

The city has a pair of George II wooden City Watch Staves. The Royal Arms are engraved on one side, with the Bath Arms on the other.

They have a painted, Japanese lacquered surface surmounted by a bulb and crown and are inscribed ‘Thos Boddely Fecit 1732’. The staves were discovered in the attic of the Guildhall in 1888 by Major Charles Davis, City Architect.

The Inspector’s Staff is shorter and thinner than the City Watch Staves. It is painted in the same style, with the same design, but lacks a bulb. It is now used by the Mayor’s Officer.