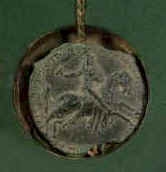 The Great Seal of Edward III is made of dark green wax and is similar to the seals of Edward I and Edward II. 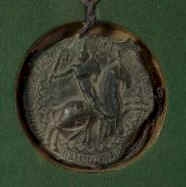 The original Great Seal of Henry V, who used his father’s seal, so this is a fine specimen of the second seal of Henry IV. It also provides a reminder of the re-building of Westminster Abbey by Henry III as a resting place for Edward the Confessor and as his own burial place. 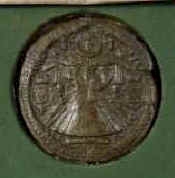 The Great Seal is the second of Elizabeth I in dark brown wax. The figure of the Queen can be seen clearly in the centre of the seal. The simplicity of the legend on either side provides a reminder that England is now free from foreign influence and that the reformation was a national and religious cause. Whilst the use of the Royal motto “Dieu et mon Droit” was continuous from Henry V onwards, Elizabeth’s motto was “Semper eadem” (Always the same).