The Mayor of Bath (Councillor Patrick Anketell-Jones) was pleased to announce that Sam Hill has been awarded the title of Mayor’s Young Citizen of The Year at a Presentation Ceremony at the Guildhall.

Nominated by Jim Noke, Activities Practitioner at Mentoring Plus, for his kind and caring passion for the community, his awareness and positive attitude to help and inspire others. He reported that Sam has been a respectful and a respected stalwart of a youth group for over a year, and during this time has helped plan and support a pop-up charity shop, inaugural Homework Club and pilot Primary/Secondary Evening Action Group.  He acts as peer support at a weekly mentoring graduates group and he is also a Police Cadet, rallies around the local football team and undertakes odd jobs for the more vulnerable locally, all at the age of 16.

The Mayor said, “Sam is a delightful young man who has made great progress over the last year.  He is clearly focused on his chosen career path and I hope this Award will help him on his way to future success.  I look forward to Sam’s company at some of my engagements during the year, and I am sure he will find them a great experience.”

The Mayor thanked Annette Dolan from Bath Aqua Glass, for assisting him with the judging and for kindly donating an engraved bowl for the Award winner.

The Award began 23 years ago to counteract some negative publicity about young people, and to encourage them and celebrate their many fine achievements. This individual award is for a 16, 17 or 18 year old who has made good progress at school or given service to the local community. 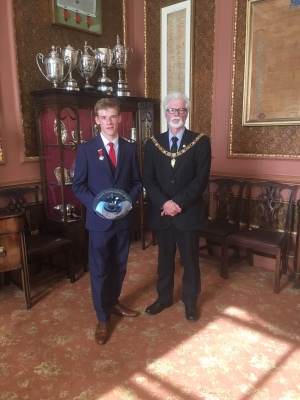 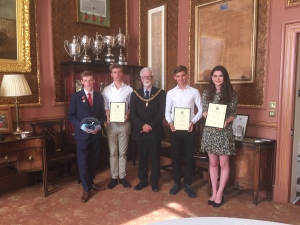